Jane Austen is celebrated as one of the greatest authors of all time — I don’t know anyone who would question that sentiment. But did you know that even iconic authors can make mistakes?
Okay, maybe not actual mistakes, but choices that are considered mistakes by readers — like Colonel Brandon marrying the “wrong” Dashwood sister, as there are many who believe he and Elinor were better suited to one another. There’s also the fact that some of her most beloved (and most ridiculed) characters are nameless — that is, they were never given first names (Christian names, as they were known then) by their creator. Why? Who knows. Maybe Jane didn’t think that they needed one. Maybe she thought they just weren’t central enough to the story to warrant one. In any case, there are quite a few main and supporting characters who didn’t get first names, leaving Austenesque authors like myself to have to choose one for them (if their inclusion in our variations requires it or just because we feel like it). Precisely because Jane did not name them herself, we can pretty much call them anything we want to, though it is most sensible to choose something that is Georgian/Regency era appropriate (I wouldn’t ever call a character from this period Dylan, for instance, unless it was an OC, and I would likely spell it Dillon and say it was his mother’s maiden name).
I’m going to cover several select characters across Austen’s six main novels who were not given first names by her, and discuss what myself and other Austenesque writers have chosen to call them. Let’s get started!
***
Pride and Prejudice
Colonel Fitzwilliam

(Left: Anthony Calf, 1995 mini-series. Right: Tom Ward, 1995 Chamberlayne, CF in Death Comes to Pemberley.)
Most common JAFF name: Richard
My choice: Theodore
_____
I could not tell you how the trend started — not where or with whom — but is has become an almost universal standard to give Colonel Fitzwilliam the first name “Richard”. So often has the name been used that readers of Austen variations have pretty much accepted that this is his first name as if Jane had given it to him herself, and they tend to get rather peeved if he is called anything else (one of my reviewers said “it should always be Richard”). One of my fellow authors once said to me that she chose to call him Richard across all her works because “that’s just not a hill I want to die on” — that is, she didn’t want to give nitpicky readers one more thing to complain about (and let’s be honest, every genre has their lot of hardcore nitpickers, even JAFF).
Why did I choose “Theodore”? There are two very simple reasons for my choice: One, I’m the type of person who will do a thing differently, if possible, when it seems like everyone else is doing it the same way. I decided that because Austen never actually gave the colonel a first name, I would give him one myself, as he was to feature as a supporting character in my What Might Have Been series at least twice, and would get his own story eventually. I decided that I didn’t want to use the same name as “everyone else”, so I looked up commonly used names from the era (I advise every Regency author to do this when naming characters). I like the name Theodore, and when I saw it on more than one name list, I had a sudden image in my head of his mother calling him Teddy, and the poor colonel getting aggravated at being referred to by a childhood nickname in front of guests. So Theodore he became.
Another reason I chose not to call him Richard is because in my research into the characters of P&P, I came across multiple references to Jane Austen herself not being fond of the name. It was said that this likely stemmed from a dispute between Austen and publisher Richard Crosby, to whom she sold the manuscript for Northanger Abbey (under the title Susan; in those days, a writer had to pay out of pocket to have a book published, and negotiate royalties with the publisher) in 1803. Publication was even advertised in a brochure. Austen wrote to Crosby’s company in 1809, six years later, to inquire as to the status of the manuscript, pressing for it’s publication as agreed upon in the original sale. She stated that she assumed it had “by some carelessness to have been lost” and offered to send him another copy. She then asked for a quick response to her letter, and stated that if she received none, she would then “feel myself at liberty to secure the publication of my work, by applying elsewhere”. Just two days after sending her letter, she received a reply in which Crosby bluntly (and arrogantly) stated that while they had received the manuscript and paid for it, there had not been a date for publication stipulated, nor were they bound by its purchase to do so. He then threatened to “take proceedings to stop the sale” should she try and publish it elsewhere, and said she could have it back for the price they paid for it. It was a further six years — and four novels published — before Austen was able, through her brother Henry, to get the manuscript back from Crosby, who then casually told the publisher only after he had purchased the rights back that its author was the same person who had written the successful Pride and Prejudice. Austen then revised the manuscript which would posthumously be published as Northanger Abbey, and not only referenced the delay in a note titled “Advertisement by the Authoress”, but further mocked Crosby himself in a remarkably subtle way by writing that Catherine Morland’s father was “…a very respectable man, though his name was Richard”.
Thus — to make a long story short — I figured there was justification in my choosing not to give Colonel Fitzwilliam the first name Richard. If Jane herself didn’t care for the name, why would she give it to one of her most endearing supporting characters? Why would anyone? Coincidentally, however, there is a Richard Fitzwilliam in my work: the colonel’s father. Not because he’s a bad guy (at least, I’ve yet to picture him thus), but because I thought I could still use it somewhere — I just didn’t want to use it for the colonel.
Also of note: Colonel Fitzwilliam’s father’s title is not given in the original novel — we only know that he is an earl (born the eldest son or is the eldest surviving son) and that he is brother to Lady Catherine de Bourgh and the late Lady Anne Darcy. The title most JAFF authors use is “Earl of Matlock”, which I believe derives from it’s use in the 1995 mini-series, though I could certainly be in error (Collins clearly refers to the colonel as “the younger son of the Earl of Matlock”; interestingly, the earl is called “Lord Denney” by Lady Catherine in the 1980 series). I chose to make his title “Earl of Disley”. Why? In part because Matlock is what every other author uses, but more so as an homage to Lyme Park, the exterior of which was used to represent Pemberley in the 1995 series. The estate is located in Disley, Cheshire.
For the sake of my own consistency, I plan to use both Theodore and Disley in all my P&P variations. The colonel’s father will also always have the name Richard.
Mr. and Mrs. Bennet

(Left: Mary Boland and Edmund Gwenn, 1940 film. Center: Alison Steadman and Benjamin Withrow, 1995 mini-series. Right: Brenda Blethyn and Donald Sutherland, 2005 film.)
Most common JAFF names: Thomas and Fanny
My choice: Thomas and Jane
_____
Like Colonel Fitzwilliam, there’s no telling why Jane never shared Mr. and Mrs. Bennet’s first names in her novel — we don’t even know if she ever gave them first names. Perhaps it is because it was not common practice in those days for a couple to refer to each other by their fist names, even if they were married. Typically, they would address one another as others did, such as “Mr. Bennet” and “Mrs. Bennet”, or in the case of titled persons, “Lord Disley” and “Lady Disley” — though married couples did sometimes address the other with affectionate terminology such as “my dear” and “my love”.
In the case of Mr. and Mrs. Bennet, the most commonly used first names are Thomas and Fanny. Not entirely certain why or how Thomas was chosen, but Fanny probably derives from its use by Mr. Gardiner in the 1995 mini-series (if there is an earlier use, I do not know of it). Now, while Thomas was a popular name in the mid- to late-1700s, when the gentleman would have been born, there are certainly many other names Mr. Bennet could have had (the mini-series Lost in Austen gave him the first name “Claude”). I actually have no problem with the name Thomas, though I had thought to give Mr. B a name of my own choosing. But to be perfectly honest, I could not settle on any other name, so Thomas he continues to be.
As for Mrs. Bennet… Her given name would not have been Fanny. “Fanny” was a nickname given to girls/women whose given name was Frances, though she may well have been called Fanny by her parents, siblings, husband, and any close friends if Frances was indeed her name. And it certainly could have been, as it was a popular name for girls in that time. However, with my propensity for not following the crowd, I wanted to give Mrs. B another name. I decided to do as Jane herself did with a couple of her other characters: Elizabeth Elliot and Fanny Price were named after their mothers (Elizabeth Stevenson Elliot and Frances Ward Price), which was as common a practice in those days as was giving a firstborn son the mother’s maiden name for a Christian name. Thus, because the Bennets’ firstborn was named Jane, I gave Mrs. Bennet the first name Jane.
So far, I have no intention to give either of them another name in future books, but that could change with my Muse’s mood.
Mrs. Gardiner 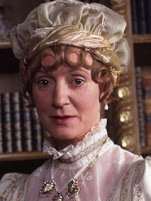 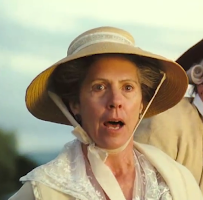 (Left: Barbara Shelley, 1980 mini-series. Center: Joanna David, 1995 mini-series. Right: Penelope Wilton, 2005 movie.)
Most common JAFF name: Madeleine
My choice: Madelene/Marjorie
_____
In Pride and Prejudice, Mrs. Gardiner — Jane and Elizabeth Bennet’s most beloved aunt — signs a letter to Elizabeth “M. Gardiner”. There are at least half a dozen (or more) names she could have had: Mary, Margaret, Marianne, Maria, Martha… The fact is, “Madeleine” (or as I spelled it, Madelene; derived from Greek and French origin as a variation of “Magdalene”) was not a name common back then, and the Jane Austen Wiki even says “this is unlikely for the era”.
Still, for whatever reason, it’s a pretty popular name for authors to give Mrs. Gardiner. Like other characters, I had fully intended to choose something no one else was using (but still era appropriate, of course!) — but as in the case of Mr. Bennet, I just could not find a name that suited. So I went ahead and used the popular JAFF name for my second book and just spelled it differently. For my third book, I did at last go wide and chose the name Marjorie after seeing it on several name lists. Whatever I may choose to call her in the future, I will certainly always use a name that starts with M.
***
Well, there you have it, my dear friends! Part 1 in a series about unnamed characters and what writers choose to call them. In Part 2, I’ll cover characters from Persuasion.
← How Rich Was Darcy, Really?
EM Storm-Smith DEBUT! →

23 Responses to What’s In A Name? Austen’s Unknown Characters and What JAFF Authors Call Them – Part 1